After 12 Months of Trump, Here's What 100 CEOs Are Saying About His Effect on Business 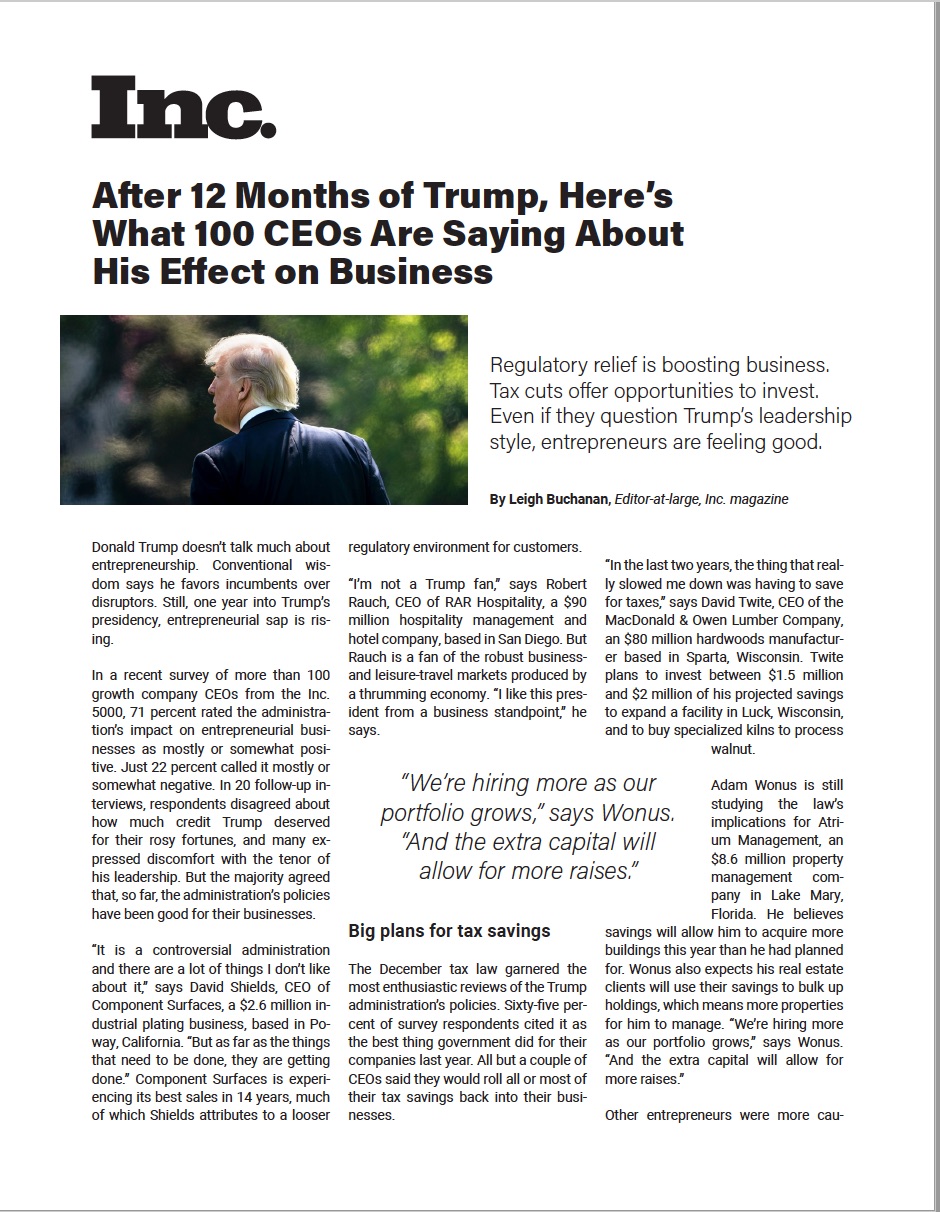 In a recent survey of more than 100 growth company CEOs from the Inc. 5000, 71 percent rated the administration’s impact on entrepreneurial businesses as mostly or somewhat positive. Just 22 percent called it mostly or somewhat negative. In 20 follow-up interviews, respondents disagreed about how much credit Trump deserved for their rosy fortunes, and many expressed discomfort with the tenor of his leadership. But the majority agreed that, so far, the administration’s policies have been good for their businesses.

“It is a controversial administration and there are a lot of things I don’t like about it,” says David Shields, CEO of Component Surfaces, a $2.6 million industrial plating business, based in Poway, California. “But as far as the things that need to be done, they are getting done.” Component Surfaces is experiencing its best sales in 14 years, much of which Shields attributes to a looser regulatory environment for customers.

“I’m not a Trump fan,” says Robert Rauch, CEO of RAR Hospitality, a $90 million hospitality management and hotel company, based in San Diego. But Rauch is a fan of the robust business and leisure-travel markets produced by a thrumming economy. “I like this president from a business standpoint,” he says.

The December tax law garnered the most enthusiastic reviews of the Trump administration’s policies. Sixty-five percent of survey respondents cited it as the best thing government did for their companies last year. All but a couple of CEOs said they would roll all or most of their tax savings back into their businesses.

“In the last two years, the thing that really slowed me down was having to save for taxes,” says David Dwite, CEO of the MacDonald & Owen Lumber Company, an $80 million hardwoods manufacturer based in Sparta, Wisconsin, Twite plans to invest between $1.5 million and $2 million of his projected savings to expand a facility in Luck, Wisconsin, and to buy specialized kilns to process walnut.

Adam Wonus is studying the law’s implications for Atrium Management, an $8.6 million property management company in Lake Mary, Florida. He believes savings will allow him to acquire more buildings this year than he had planned for. Wonus also expects his real estate clients will use their savings to bulk up holdings, which means more properties for him to manage. “We’re hiring more as our portfolio grows,” says Wonus. “And the extra capital will allow for more raises.”