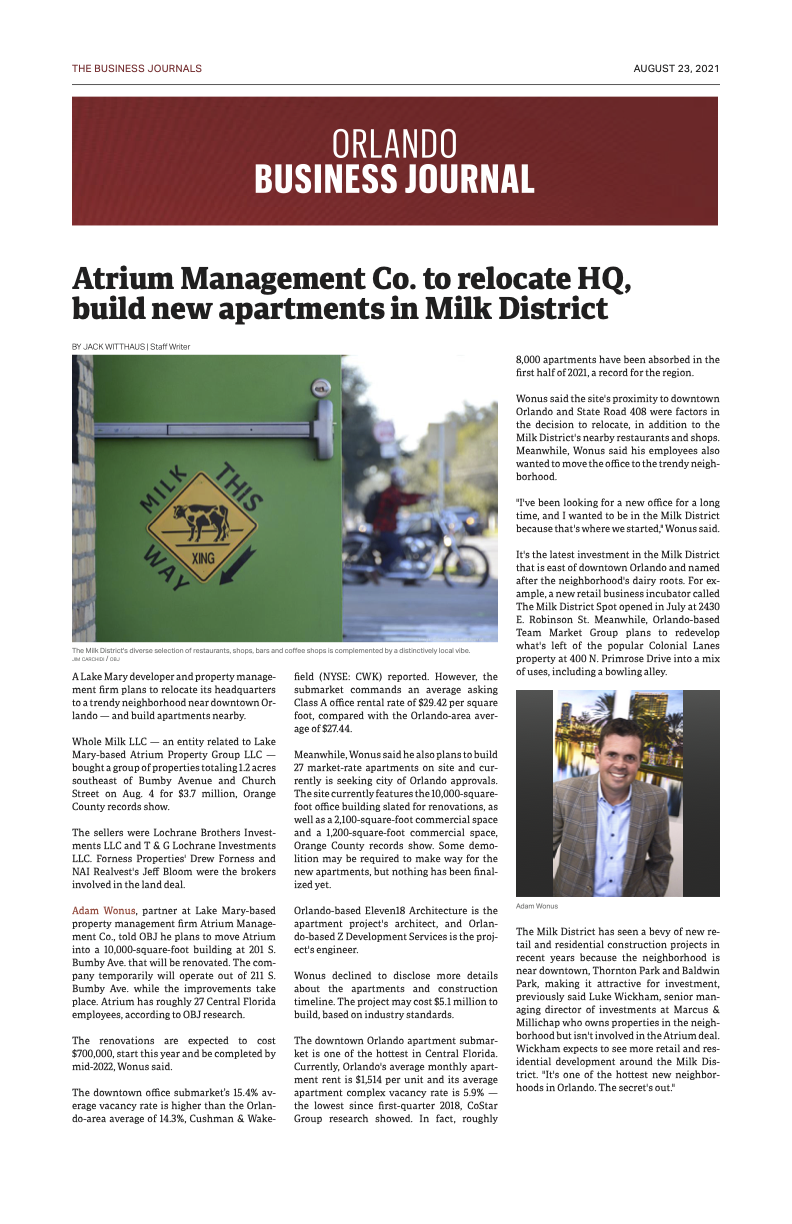 A Lake Mary developer and property management firm plans to relocate its headquarters to a trendy neighborhood near downtown Orlando — and build apartments nearby.

Adam Wonus, partner at Lake Mary-based property management firm Atrium Management Co., told OBJ he plans to move Atrium into a 10,000-square-foot building at 201 S. Bumby Ave. that will be renovated. The company temporarily will operate out of 211 S. Bumby Ave. while the improvements take place. Atrium has roughly 27 Central Florida employees, according to OBJ research.

Wonus declined to disclose more details about the apartments and construction timeline. The project may cost $5.1 million to build, based on industry standards.

The downtown Orlando apartment submarket is one of the hottest in Central Florida. Currently, Orlando's average monthly apartment rent is $1,514 per unit and its average apartment complex vacancy rate is 5.9% — the lowest since first-quarter 2018, CoStar Group research showed. In fact, roughly 8,000 apartments have been absorbed in the first half of 2021, a record for the region.

Wonus said the site's proximity to downtown Orlando and State Road 408 were factors in the decision to relocate, in addition to the Milk District's nearby restaurants and shops. Meanwhile, Wonus said his employees also wanted to move the office to the trendy neighborhood.

"I've been looking for a new office for a long time, and I wanted to be in the Milk District because that's where we started," Wonus said.

It's the latest investment in the Milk District that is east of downtown Orlando and named after the neighborhood's dairy roots. For ex-ample, a new retail business incubator called The Milk District Spot opened in July at 2430 E. Robinson St. Meanwhile, Orlando-based Team Market Group plans to redevelop what's left of the popular Colonial Lanes property at 400 N. Primrose Drive into a mix of uses, including a bowling alley.

The Milk District has seen a bevy of new re-tail and residential construction projects in recent years because the neighborhood is near downtown, Thornton Park and Baldwin Park, making it attractive for investment, previously said Luke Wickham, senior man-aging director of investments at Marcus & Millichap who owns properties in the neighborhood but isn't involved in the Atrium deal. Wickham expects to see more retail and residential development around the Milk District. "It's one of the hottest new neighbor-hoods in Orlando. The secret's out."