Milk District Areas to Get Makeover 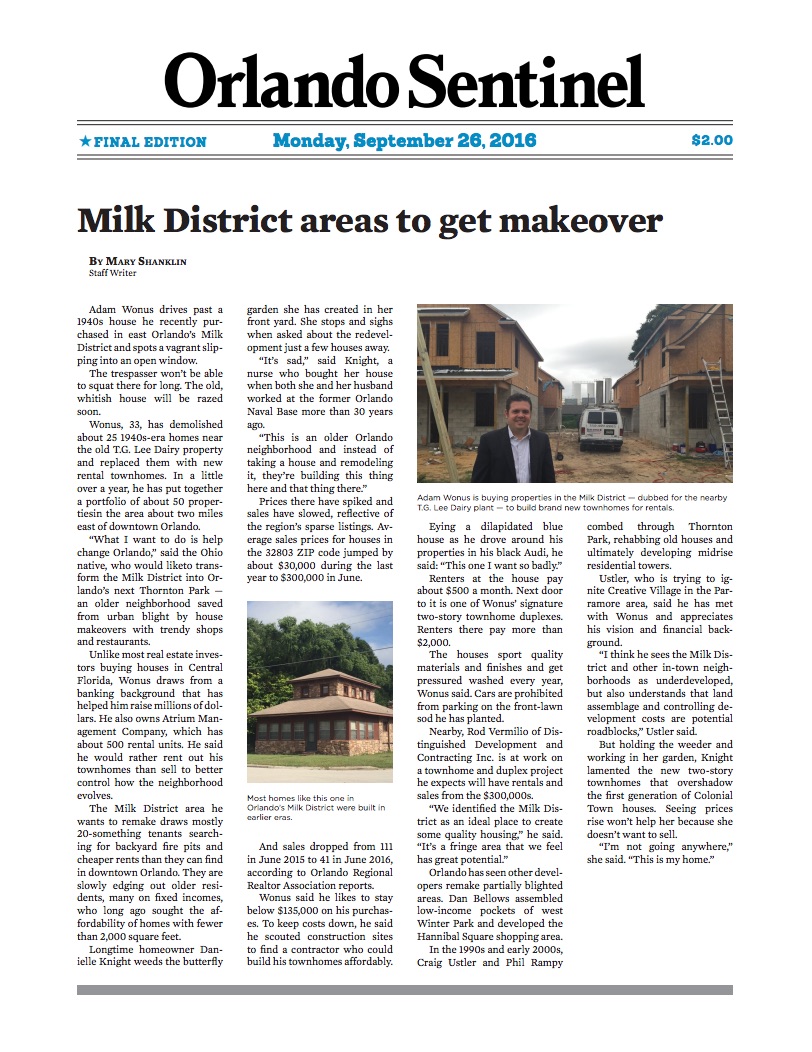 Adam Wonus drives past a 1940s house he recently purchased in east Orlando’s Milk District and spots a vagrant slipping into an open window.

The trespasser won’t be able to squat there for long. The old, whitish house will be razed soon.

Wonus, 33, has demolished about 25 1940s-era homes near the old T.G. Lee Dairy property and replaced them with new rental townhomes. In a little over a year, he has put together a portfolio of about 50 properties in the area about two miles east of downtown Orlando.

“What I want to do is help change Orlando,” said the Ohio native, who would like to transform the Milk District into Orlando’s next Thornton Park — an older neighborhood saved from urban blight by house makeovers with trendy shops and restaurants.

Unlike most real estate investors buying houses in Central Florida, Wonus draws from a banking background that has helped him raise millions of dollars. He also owns Atrium Management Company, which has about 500 rental units. He said he would rather rent out his townhomes than sell to better control how the neighborhood evolves.

The Milk District area he wants to remake draws mostly 20-something tenants searching for backyard fire pits and cheaper rents than they can find in downtown Orlando. They are slowly edging out older residents, many on fixed incomes, who long ago sought the affordability of homes with fewer than 2,000 square feet.

Longtime homeowner Danielle Knight weeds the butterfly garden she has created in her front yard. She stops and sighs when asked about the redevelopment just a few houses away.

“It’s sad,” said Knight, a nurse who bought her house when both she and her husband worked at the former Orlando Naval Base more than 30 years ago.

“This is an older Orlando neighborhood and instead of taking a house and remodeling it, they’re building this thing here and that thing there.”

Prices there have spiked and sales have slowed, reflective of the region’s sparse listings. Average sales prices for houses in the 32803 ZIP code jumped by about $30,000 during the last year to $300,000 in June.

And sales dropped from 111 in June 2015 to 41 in June 2016, according to Orlando Regional Realtor Association reports.

Wonus said he likes to stay below $135,000 on his purchases. To keep costs down, he said he scouted construction sites to find a contractor who could build his townhomes affordably.

Eying a dilapidated blue house as he drove around his properties in his black Audi, he said: “This one I want so badly.”

Renters at the house pay about $500 a month. Next door to it is one of Wonus’ signature two-story townhome duplexes. Renters there pay more than $2,000.

The houses sport quality materials and finishes and get pressured washed every year, Wonus said. Cars are prohibited from parking on the front-lawn sod he has planted.

Nearby, Rod Vermilio of Distinguished Development and Contracting Inc. is at work on a townhome and duplex project he expects will have rentals and sales from the $300,000s.

“We identified the Milk District as an ideal place to create some quality housing,” he said. “It’s a fringe area that we feel has great potential.”

Ustler, who is trying to ignite Creative Village in the Parramore area, said he has met with Wonus and appreciates his vision and financial background.

“I think he sees the Milk District and other in-town neighborhoods as underdeveloped, but also understands that land assemblage and controlling development costs are potential roadblocks,” Ustler said.

But holding the weeder and working in her garden, Knight lamented the new two-story townhomes that overshadow the first generation of Colonial Town houses. Seeing prices rise won’t help her because she doesn’t want to sell.