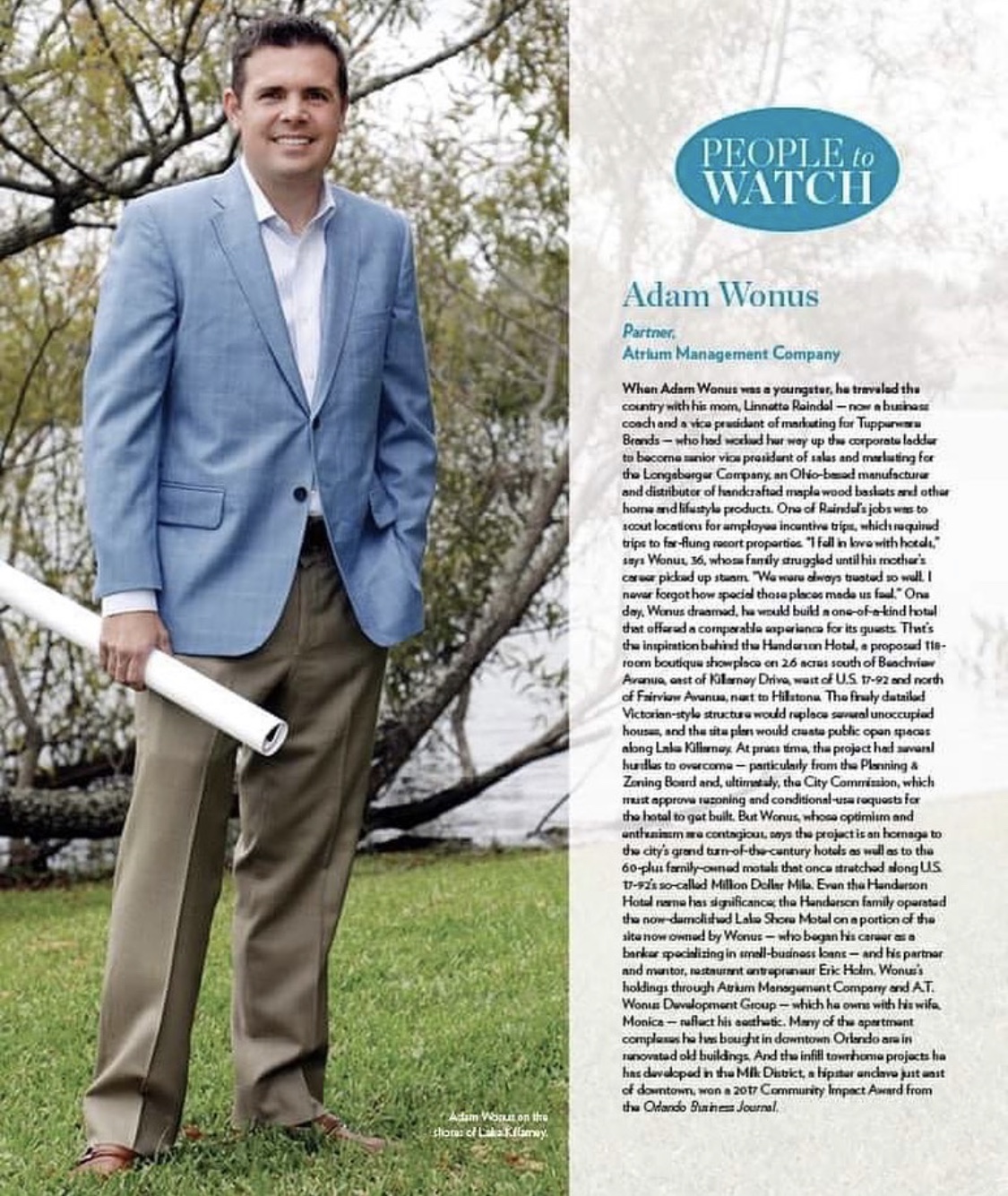 When Adam Wonus was a youngster, he traveled the country with his mom, Linnette Reindel — now a business coach and a vice president of marketing for Tupperware Brands — who had worked her way up the corporate ladder to become senior vice president of sales and marketing for the Longaberger Company, an Ohio-based manufacturer and distributor of handcrafted maple wood baskets and other home and lifestyle products. One of Reindel’s jobs was to scout locations for employee incentive trips, which required trips to far-flung resort properties. “I fell in love with hotels,” says Wonus, 36, whose family struggled until his mother’s career picked up steam. “We were always treated so well. I never forgot how special those places made us feel.”

One day, Wonus dreamed, he would build a one-of-a-kind hotel that offered a comparable experience for its guests. That’s the inspiration behind the Henderson Hotel, a proposed 118-room boutique showplace on 2.6 acres south of Beachview Avenue, east of Killarney Drive, west of U.S. 17-92 and north of Fairview Avenue, next to Hillstone. The finely detailed Victorian-style structure would replace several unoccupied houses, and the site plan would create public open spaces along Lake Killarney. At press time, the project had several hurdles to overcome — particularly from the Planning & Zoning Board and, ultimately, the City Commission, which must approve rezoning and conditional-use requests for the hotel to get built.

But Wonus, whose optimism and enthusiasm are contagious, says the project is an homage to the city’s grand turn-of-the-century hotels as well as to the 60-plus family-owned motels that once stretched along U.S. 17-92’s so-called Million Dollar Mile. Even the Henderson Hotel name has significance; the Henderson family operated the now-demolished Lake Shore Motel on a portion of the site now owned by Wonus — who began his career as a banker specializing in small-business loans — and his partner and mentor, restaurant entrepreneur Eric Holm.

Wonus’s holdings through Atrium Management Company and A.T. Wonus Development Group — which he owns with his wife, Monica — reflect his aesthetic. Many of the apartment complexes he has bought in downtown Orlando are in renovated old buildings. And the infill townhome projects he has developed in the Milk District, a hipster enclave just east of downtown, won a 2017 Adam Wonus on the Community Impact Award from the Orlando Business Journal.