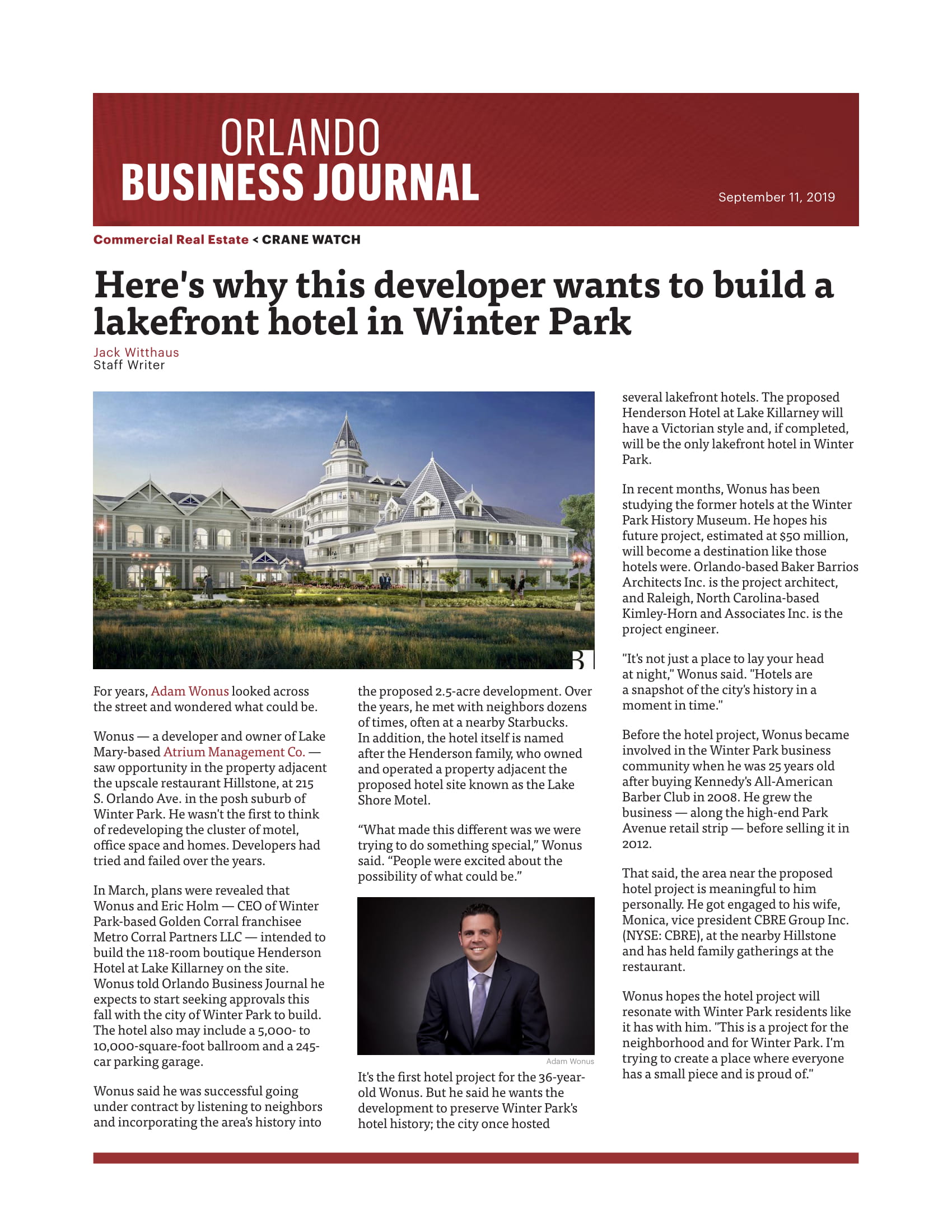 For years, Adam Wonus looked across the street and wondered what could be.

Wonus — a developer and owner of Lake Mary-based Atrium Management Co. — saw opportunity in the property adjacent the upscale restaurant Hillstone, at 215 S. Orlando Ave. in the posh suburb of Winter Park. He wasn't the first to think of redeveloping the cluster of motel, office space and homes. Developers had tried and failed over the years.

In March, plans were revealed that Wonus and Eric Holm — CEO of Winter Park-based Golden Corral franchisee Metro Corral Partners LLC — intended to build the 118-room boutique Henderson Hotel at Lake Killarney on the site. Wonus told Orlando Business Journal he expects to start seeking approvals this fall with the city of Winter Park to build. The hotel also may include a 5,000- to 10,000-square-foot ballroom and a 245-car parking garage.

Wonus said he was successful going under contract by listening to neighbors and incorporating the area's history into the proposed 2.5-acre development. Over the years, he met with neighbors dozens of times, often at a nearby Starbucks. In addition, the hotel itself is named after the Henderson family, who owned and operated a property adjacent the proposed hotel site known as the Lake Shore Motel.

“What made this different was we were trying to do something special,” Wonus said. “People were excited about the possibility of what could be.”

It's the first hotel project for the 36-year-old Wonus. But he said he wants the development to preserve Winter Park's hotel history; the city once hosted several lakefront hotels. The proposed Henderson Hotel at Lake Killarney will have a Victorian style and, if completed, will be the only lakefront hotel in Winter Park.

In recent months, Wonus has been studying the former hotels at the Winter Park History Museum. He hopes his future project, estimated at $50 million, will become a destination like those hotels were. Orlando-based Baker Barrios Architects Inc. is the project architect, and Raleigh, North Carolina-based Kimley-Horn and Associates Inc. is the project engineer.

"It's not just a place to lay your head at night," Wonus said. "Hotels are a snapshot of the city's history in a moment in time."

Before the hotel project, Wonus became involved in the Winter Park business community when he was 25 years old after buying Kennedy's All-American Barber Club in 2008. He grew the business — along the high-end Park Avenue retail strip — before selling it in 2012.

That said, the area near the proposed hotel project is meaningful to him personally. He got engaged to his wife, Monica, vice president CBRE Group Inc. (NYSE: CBRE), at the nearby Hillstone and has held family gatherings at the restaurant.

Wonus hopes the hotel project will resonate with Winter Park residents like it has with him. "This is a project for the neighborhood and for Winter Park. I'm trying to create a place where everyone has a small piece and is proud of."