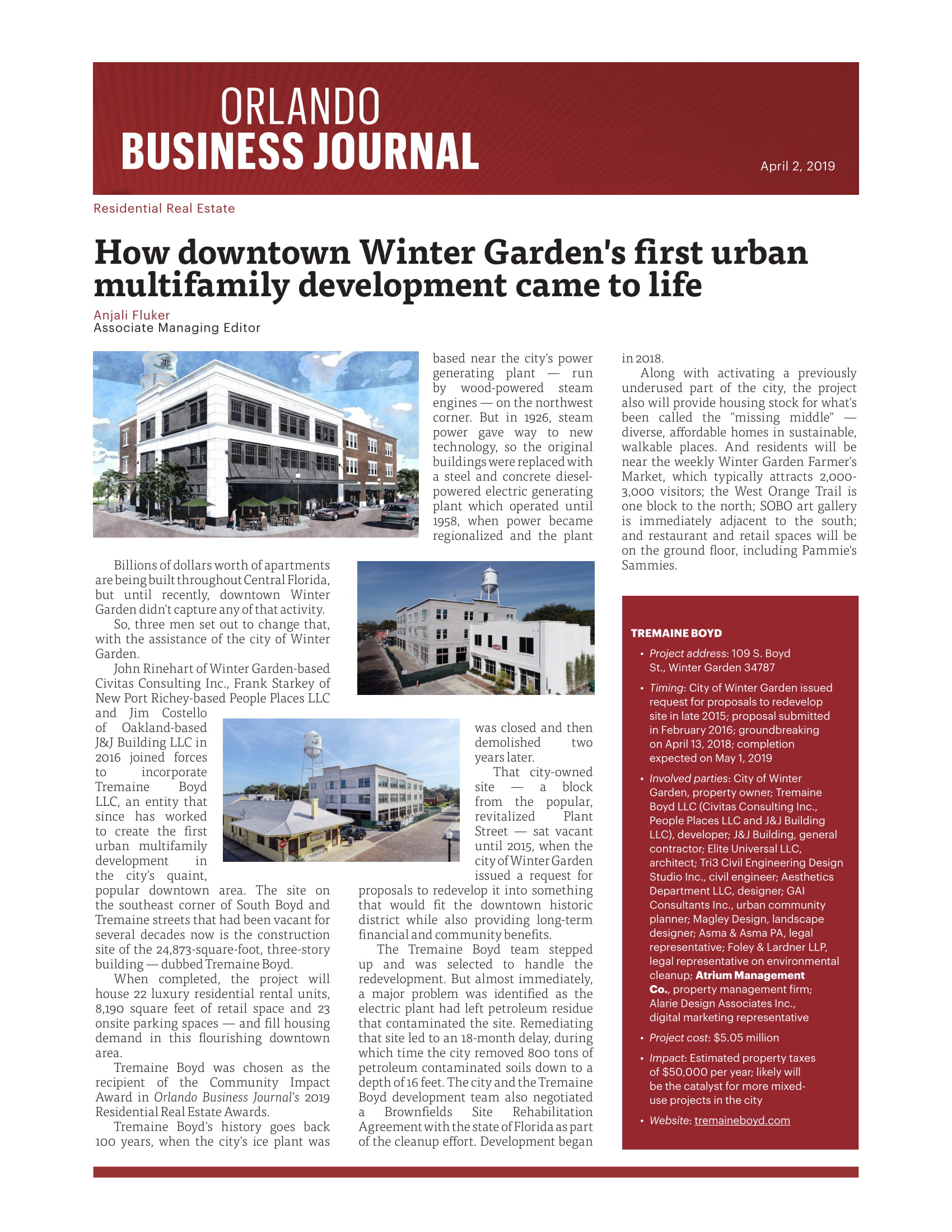 Billions of dollars worth of apartments are being built throughout Central Florida, but until recently, downtown Winter Garden didn't capture any of that activity.

So, three men set out to change that, with the assistance of the city of Winter Garden.

John Rinehart of Winter Garden-based Civitas Consulting Inc., Frank Starkey of New Port Richey-based People Places LLC and Jim Costello of Oakland-based J&J Building LLC in 2016 joined forces to incorporate Tremaine Boyd LLC, an entity that since has worked to create the first urban multifamily development in the city's quaint, popular downtown area. The site on the southeast corner of South Boyd and Tremaine streets that had been vacant for several decades now is the construction site of the 24,873-square-foot, three-story building — dubbed Tremaine Boyd.

Tremaine Boyd was chosen as the recipient of the Community Impact Award in Orlando Business Journal's 2019 Residential Real Estate Awards.

Tremaine Boyd's history goes back 100 years, when the city's ice plant was based near the city's power generating plant — run by wood-powered steam engines — on the northwest corner. But in 1926, steam power gave way to new technology, so the original buildings were replaced with a steel and concrete diesel-powered electric generating plant which operated until 1958, when power became regionalized and the plant was closed and then demolished two years later.

That city-owned site — a block from the popular, revitalized Plant Street — sat vacant until 2015, when the city of Winter Garden issued a request for proposals to redevelop it into something that would fit the downtown historic district while also providing long-term financial and community benefits.

The Tremaine Boyd team stepped up and was selected to handle the redevelopment. But almost immediately, a major problem was identified as the electric plant had left petroleum residue that contaminated the site. Remediating that site led to an 18-month delay, during which time the city removed 800 tons of petroleum contaminated soils down to a depth of 16 feet. The city and the Tremaine Boyd development team also negotiated a Brownfields Site Rehabilitation Agreement with the state of Florida as part of the cleanup effort. Development began in 2018.

Along with activating a previously underused part of the city, the project also will provide housing stock for what's been called the "missing middle" — diverse, affordable homes in sustainable, walkable places. And residents will be near the weekly Winter Garden Farmer's Market, which typically attracts 2,000-3,000 visitors; the West Orange Trail is one block to the north; SOBO art gallery is immediately adjacent to the south; and restaurant and retail spaces will be on the ground floor, including Pammie's Sammies.

• Timing: City of Winter Garden issued request for proposals to redevelop site in late 2015; proposal submitted in February 2016; groundbreaking on April 13, 2018; completion expected on May 1, 2019

• Impact: Estimated property taxes of $50,000 per year; likely will be the catalyst for more mixed-use projects in the city