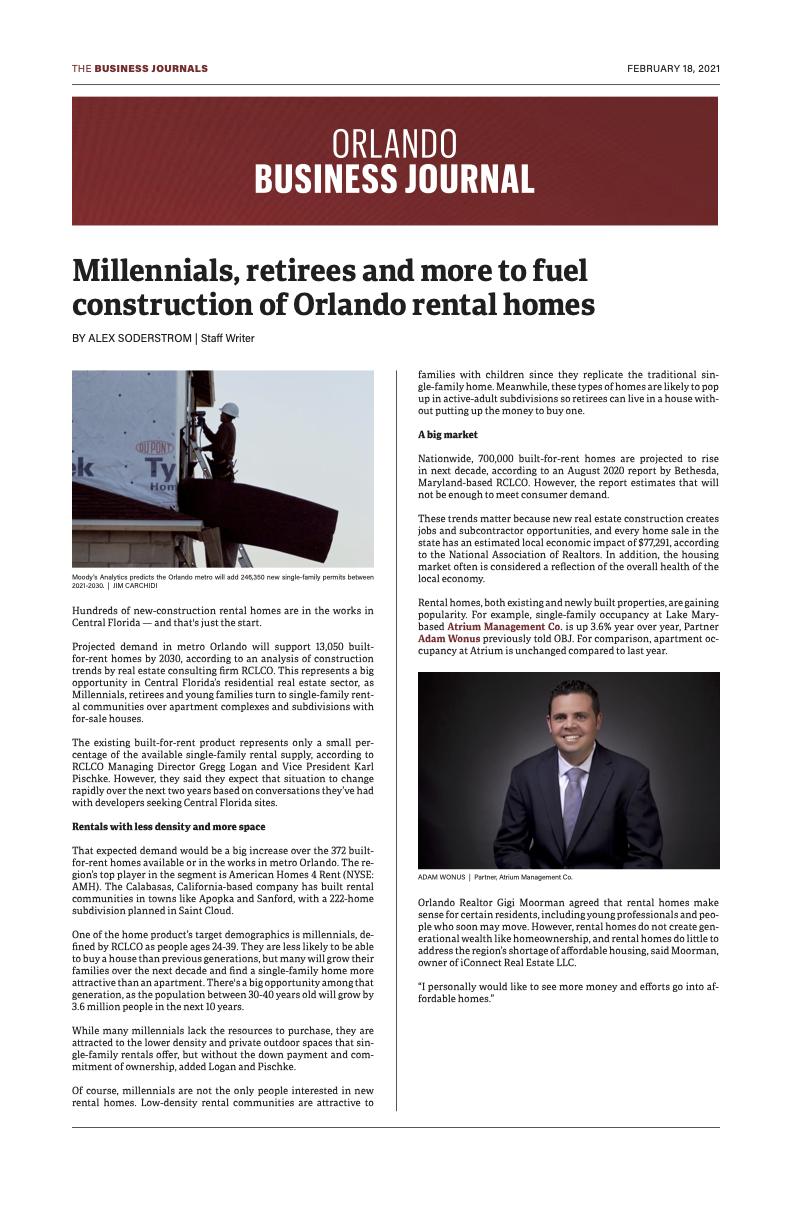 Hundreds of new-construction rental homes are in the works in Central Florida — and that's just the start.

Projected demand in metro Orlando will support 13,050 built-for-rent homes by 2030, according to an analysis of construction trends by real estate consulting firm RCLCO. This represents a big opportunity in Central Florida’s residential real estate sector, as Millennials, retirees and young families turn to single-family rent-al communities over apartment complexes and subdivisions with for-sale houses.

The existing built-for-rent product represents only a small percentage of the available single-family rental supply, according to RCLCO Managing Director Gregg Logan and Vice President Karl Pischke. However, they said they expect that situation to change rapidly over the next two years based on conversations they’ve had with developers seeking Central Florida sites.

That expected demand would be a big increase over the 372 built-for-rent homes available or in the works in metro Orlando. The region’s top player in the segment is American Homes 4 Rent (NYSE: AMH). The Calabasas, California-based company has built rental communities in towns like Apopka and Sanford, with a 222-home subdivision planned in Saint Cloud.

One of the home product’s target demographics is millennials, de-fined by RCLCO as people ages 24-39. They are less likely to be able to buy a house than previous generations, but many will grow their families over the next decade and find a single-family home more attractive than an apartment. There's a big opportunity among that generation, as the population between 30-40 years old will grow by 3.6 million people in the next 10 years.

While many millennials lack the resources to purchase, they are attracted to the lower density and private outdoor spaces that single-family rentals offer, but without the down payment and commitment of ownership, added Logan and Pischke.

Of course, millennials are not the only people interested in new rental homes. Low-density rental communities are attractive to families with children since they replicate the traditional single-family home. Meanwhile, these types of homes are likely to pop up in active-adult subdivisions so retirees can live in a house with-out putting up the money to buy one.

Nationwide, 700,000 built-for-rent homes are projected to rise in next decade, according to an August 2020 report by Bethesda, Maryland-based RCLCO. However, the report estimates that will not be enough to meet consumer demand.

These trends matter because new real estate construction creates jobs and subcontractor opportunities, and every home sale in the state has an estimated local economic impact of $77,291, according to the National Association of Realtors. In addition, the housing market often is considered a reflection of the overall health of the local economy.

Orlando Realtor Gigi Moorman agreed that rental homes make sense for certain residents, including young professionals and people who soon may move. However, rental homes do not create generational wealth like homeownership, and rental homes do little to address the region’s shortage of affordable housing, said Moorman, owner of iConnect Real Estate LLC.

“I personally would like to see more money and efforts go into affordable homes.”