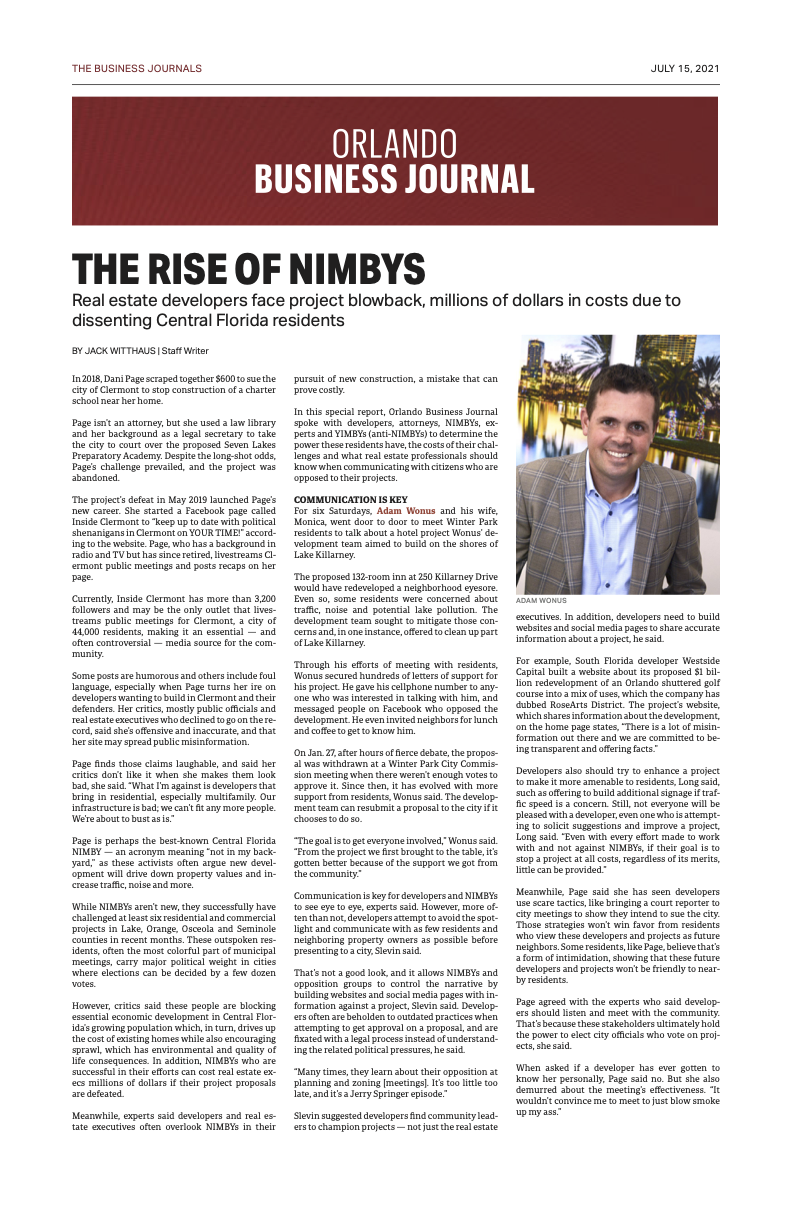 In 2018, Dani Page scraped together $600 to sue the city of Clermont to stop construction of a charter school near her home.

Page isn’t an attorney, but she used a law library and her background as a legal secretary to take the city to court over the proposed Seven Lakes Preparatory Academy. Despite the long-shot odds, Page’s challenge prevailed, and the project was abandoned.

The project’s defeat in May 2019 launched Page’s new career. She started a Facebook page called Inside Clermont to “keep up to date with political shenanigans in Clermont on YOUR TIME!” accord-ing to the website. Page, who has a background in radio and TV but has since retired, livestreams Clermont public meetings and posts recaps on her page.

Currently, Inside Clermont has more than 3,200 followers and may be the only outlet that livestreams public meetings for Clermont, a city of 44,000 residents, making it an essential — and often controversial — media source for the community.

Some posts are humorous and others include foul language, especially when Page turns her ire on developers wanting to build in Clermont and their defenders. Her critics, mostly public officials and real estate executives who declined to go on the re-cord, said she’s offensive and inaccurate, and that her site may spread public misinformation.

Page finds those claims laughable, and said her critics don’t like it when she makes them look bad, she said. “What I’m against is developers that bring in residential, especially multifamily. Our infrastructure is bad; we can’t fit any more people. We’re about to bust as is.”

Page is perhaps the best-known Central Florida NIMBY — an acronym meaning “not in my back-yard,” as these activists often argue new development will drive down property values and in-crease traffic, noise and more.

While NIMBYs aren’t new, they successfully have challenged at least six residential and commercial projects in Lake, Orange, Osceola and Seminole counties in recent months. These outspoken res-idents, often the most colorful part of municipal meetings, carry major political weight in cities where elections can be decided by a few dozen votes.

However, critics said these people are blocking essential economic development in Central Flor-ida’s growing population which, in turn, drives up the cost of existing homes while also encouraging sprawl, which has environmental and quality of life consequences. In addition, NIMBYs who are successful in their efforts can cost real estate execs millions of dollars if their project proposals are defeated.

Meanwhile, experts said developers and real estate executives often overlook NIMBYs in their pursuit of new construction, a mistake that can prove costly.

In this special report, Orlando Business Journal spoke with developers, attorneys, NIMBYs, ex-perts and YIMBYs (anti-NIMBYs) to determine the power these residents have, the costs of their challenges and what real estate professionals should know when communicating with citizens who are opposed to their projects.

For six Saturdays, Adam Wonus and his wife, Monica, went door to door to meet Winter Park residents to talk about a hotel project Wonus’ development team aimed to build on the shores of Lake Killarney.

The proposed 132-room inn at 250 Killarney Drive would have redeveloped a neighborhood eyesore. Even so, some residents were concerned about traffic, noise and potential lake pollution. The development team sought to mitigate those concerns and, in one instance, offered to clean up part of Lake Killarney.

Through his efforts of meeting with residents, Wonus secured hundreds of letters of support for his project. He gave his cellphone number to any-one who was interested in talking with him, and messaged people on Facebook who opposed the development. He even invited neighbors for lunch and coffee to get to know him.

On Jan. 27, after hours of fierce debate, the proposal was withdrawn at a Winter Park City Commission meeting when there weren’t enough votes to approve it. Since then, it has evolved with more support from residents, Wonus said. The development team can resubmit a proposal to the city if it chooses to do so.

“The goal is to get everyone involved,” Wonus said. “From the project we first brought to the table, it’s gotten better because of the support we got from the community.”

Communication is key for developers and NIMBYs to see eye to eye, experts said. However, more of-ten than not, developers attempt to avoid the spot-light and communicate with as few residents and neighboring property owners as possible before presenting to a city, Slevin said.

That’s not a good look, and it allows NIMBYs and opposition groups to control the narrative by building websites and social media pages with in-formation against a project, Slevin said. Developers often are beholden to outdated practices when attempting to get approval on a proposal, and are fixated with a legal process instead of understand-ing the related political pressures, he said.

“Many times, they learn about their opposition at planning and zoning [meetings]. It’s too little too late, and it’s a Jerry Springer episode.”

For example, South Florida developer Westside Capital built a website about its proposed $1 billion redevelopment of an Orlando shuttered golf course into a mix of uses, which the company has dubbed RoseArts District. The project’s website, which shares information about the development, on the home page states, “There is a lot of misinformation out there and we are committed to be-ing transparent and offering facts.”

Developers also should try to enhance a project to make it more amenable to residents, Long said, such as offering to build additional signage if traffic speed is a concern. Still, not everyone will be pleased with a developer, even one who is attempt-ing to solicit suggestions and improve a project, Long said. “Even with every effort made to work with and not against NIMBYs, if their goal is to stop a project at all costs, regardless of its merits, little can be provided.”

Meanwhile, Page said she has seen developers use scare tactics, like bringing a court reporter to city meetings to show they intend to sue the city. Those strategies won’t win favor from residents who view these developers and projects as future neighbors. Some residents, like Page, believe that’s a form of intimidation, showing that these future developers and projects won’t be friendly to near-by residents.

Page agreed with the experts who said developers should listen and meet with the community. That’s because these stakeholders ultimately hold the power to elect city officials who vote on projects, she said.

When asked if a developer has ever gotten to know her personally, Page said no. But she also demurred about the meeting’s effectiveness. “It wouldn’t convince me to meet to just blow smoke up my ass.”